“Beautyblender” is a term we all know and love… but is there such thing as loving something too much??

We all know Beautyblender… right? The little pink makeup sponge that looks like a pointy egg? Ok, good.  Moving on.

So I was casually browsing LinkedIn the other day like any other business major and came across a case study about Beautyblender from Red Points, a company dedicated to protecting intellectual property.  The case study spoke about Beautyblender fakes on Facebook and Instagram and how the company partnered with Red Points to stop infringing listings on these websites.  Apparently, the fancy technology Red Points has detected over 19,700 infringement cases.  The thing I found most interesting was that this section on the case study was called “the ugly side of success” and it made me realize that Beautyblender may very well be the Scotch Tape of the beauty industry.

I know some of you may be thinking, “What does Beautyblender have to do with Scotch Tape?”

The reason why I’m bringing up Scotch Tape is because it’s a classic example of genericide, which according to Cornell Law’s Legal Information Institute, can be defined as “A process by which a trademark owner loses trademark rights because the trademark is used widely and indiscriminately to refer to a type of product or service.”  The example given by this definition is how escalator was originally a protected trademark used to designate the moving stairs manufactured by a specific company, but eventually, the word became synonymous with the “very idea of moving stairs” and lost its trademark protection.  Scotch Tape has gone through something very similar, at least here in the US, as we tend to use it automatically to describe any type of clear tape no matter what brand, even though the generic trade name is “clear adhesive tape” as Scotch Tape is a brand name used by the company 3M.  If you’re interested, a list of generic and genericized trademarks can actually be found on Wikipedia.

The tie in between Scotch Tape and the Beautyblender (sometimes stylized as “beauty blender” in two words) is that it seems to me (and Red Points, apparently) that the Beautyblender product has become so successful that the very term is now used to describe any kind of blending sponge – no matter what brand or shape, at this point.  Think about it: aside from the numerous dupes of the product you can see online, how many times have you personally described a generic egg-shaped blending sponge as a “Beautyblender,” or how many times have you watched a YouTube video where the guru called a blending sponge a “Beautyblender” even though it’s obvious it’s from Real Techniques or Flower Beauty.  I know I’m guilty of both things – I think the idea of the Beautyblender has just permeated our minds so much that its now become synonymous with blending sponges in general.  While this seems like great news for the company in general as it has great top-of-mind recall, it can also be problematic from a legal standpoint.

The idea of brands being “destroyed” by their own success is also shown in an article by BBC as a partner is quoted explaining that this phenomenon is problematic “because the brand stops being a badge of origin and just becomes a generic term.”  As additionally pointed out by an article in The Blade, this can lead to a judge ruling that a name is too “generic” to be a trademark, such as in the case of the escalator, or even when Bayer lost the trademark for “aspirin” in the 1920’s.  Of course, this can vary country-to-country, as one of the examples given is using “Hoover” instead of vacuum in the UK and I have never once referred to vacuuming as “Hoovering,” but I digress. Obviously Beautyblender also encountered problems from this or they wouldn’t have partnered with Red Points in the first place!

Another interesting thing to me is that this article was published in 2014 and while Beautyblender as a company has been around since 2002, Google Trends shows the search terms for both “beautyblender” and “beauty blender” gaining more predominance in the 2015-2017 timeframe, after the article was written.  Since then, websites and apps like Wish have become more popular and there are currently around 5.52 million videos displayed YouTube for the search query “Wish app.”

These apps tend to take advantage of brand names when it comes to naming their offerings, as you can see in this $4 item above – even though this isn’t explicitly marketed as a “beauty blender” the keywords “beauty” and “blender” are listed in the description, along with a million others words you can think of to describe this item in an effort to get it to show up for a wide variety of search terms.  While I guess this is technically legal (I’m no lawyer so don’t quote me on that – it may be illegal as far as I know) because the marketing here isn’t explicitly “beautyblender,” this product is obviously piggybacking off of the popularity of the term in searches to try and sell itself.  Safiya Nygaard on YouTube actually has a few videos on Wish, which can be found in this playlist if anybody is interested!

Long-winded intro aside, all of this got me wondering… are there any other products in the beauty sphere that have gone down this same path as the Beautyblender?  I thought of a few products that I personally tend to think of or say in the “generic” sense that might apply, even if to a lesser extent than Beautyblender:

One of the things that immediately came to mind was how I tend to say “Dipbrow” (in reference to ABH’s DIPBROW Pomade) for any kind of brow pomade, despite the fact that I don’t even fill in my eyebrows.  I’ve also seen this a few times in YouTube videos, so at least I’m not alone here.

For me, ChapStick is an essential part of my everyday life, even though I don’t technically use ChapStick – I use Dr. Bronner’s as my lip balm of choice, I just tend to call it “ChapStick.”  The actual Chapstick brand is manufactured by Pfizer and although it’s been genericized, it’s still a registered trademark. 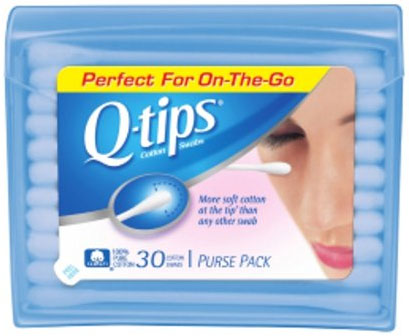 I know this isn’t explicitly a beauty product, but q-tips are always very handy to have for things like packing on eyeshadow to cleaning up mascara mistakes.  I always refer to a cotton swab as a “q-tip” even though I buy the cheaper generic option at CVS.  Even though this is on that list of genericized products and is often used as a generic term by consumers in Canada and the USA, it’s still a legally recognized trademark.

Hey, check out that full-circle ending! This also might be cheating again, but similar to cotton swabs, clear adhesive tape has many beauty uses, such as for creating a crisp wing or for nail art. Of course, Scotch Tape is the brand itself, but it’s just so much easier to say than “clear adhesive tape.”  Apparently it appears in dictionaries as both generic and trademarked, but “Trademark Law” advises that proper usage is “Scotch brand cellophane tape” to combat “generic tendencies.”

Obviously companies like Beautyblender need to have strategies in place for when the name becomes so popular that it alone seems to be able to sell product, but this has also been happening to beauty gurus such as Tati, who has had her photos stolen and used to promote products she was reviewing – not endorsing.  Another example is Shaaanxo, who tweeted about Younique posting about how much she loved their product even before her review went up.

As it currently stands, Beautyblender is a registered trademark of Rea.deeming Beauty, Inc.  Do I think that it’s in danger of becoming so genericized that it loses this trademark? No… but again, I’m no lawyer.  All I’m saying is that if Scotch Tape can be as genericized as it is and still have trademark protection, so can Beautyblender, and I’m not even tryna be shady on that!!!

When it comes to other beauty products becoming genericized, it was actually really hard for me to think of something on the same scale as the Beautyblender.  While the idea of a beauty sponge may not have necessarily been new since those little triangle wedges have been around for ages, I think the presentation and marketing of the Beautyblender was a pretty disruptive innovation as it changed the way the mainstream consumer (not just makeup artists) approached foundation/concealer application.  I also think it’s this early-mover advantage that allowed Beautyblender to become such a widely-used term, so much so that it seems to have created a bit of a headache for the company.  At the end of the day, maybe it’s ok to not be popular.  At least that’s what I’m going to keep telling my inner sixth-grade self.

As I said, thinking of genericized beauty products was really hard for me! Can anybody think of any other brands/products that they tend to use generically now/have heard been used generically??

*Disclaimer: I am not affiliated with or compensated by any of the brands mentioned (I wish!).  As always, all thoughts & opinions are my own (unless stated otherwise)!